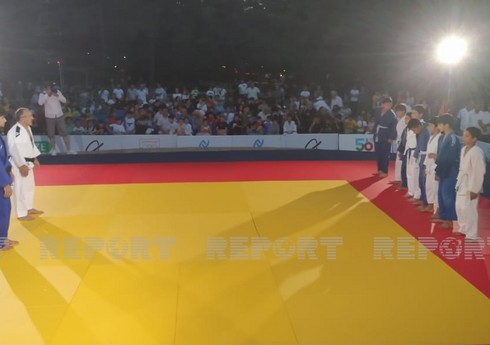 A master class was held in Zagatala within the framework of events related to the 50th anniversary of the creation of judo in Azerbaijan.

“Report”According to the information of the North-West Bureau of Azerbaijan, the general public was informed about the philosophy of judo and the role it plays in the spiritual and physical education of children and young people at the event jointly organized by the Ministry of Youth and Sports of Azerbaijan and the Judo Federation.

Within the framework of the master class, Natig Bagirov, adviser to the ACF president, world prize winner, and Ibrahim Aliyev, the gold medalist of the Islamic Games Olympics, which ended in Konya, Turkey, demonstrated the execution of various judo tricks to teenagers and young judokas, as well as the residents of Zagatala. Natig Bagirov informed the participants of the master class about the essence of judo and the rules of tying a belt. Residents of Zagatala, children and teenagers were invited to the tatami and they tried to perform various tricks.

During the event, quizzes were organized for the participants, various questions were asked about the sport of judo, and prizes were presented to the winners.

The Azerbaijan Judo Federation plans to organize similar events in other cities and regions of our country as part of the events related to the 50th anniversary of the establishment of judo in our country.

Minister of Energy Parviz Shahbazov received Minister of State for Petroleum Musadik Masood Maliki of Pakistan's Ministry of Energy, who was on a visit to ... Read More

NEWER POSTThe number of people killed in road accidents in Mardin has increased
OLDER POSTAn incident occurred in the match between “Sabah” and “Neftchi”.