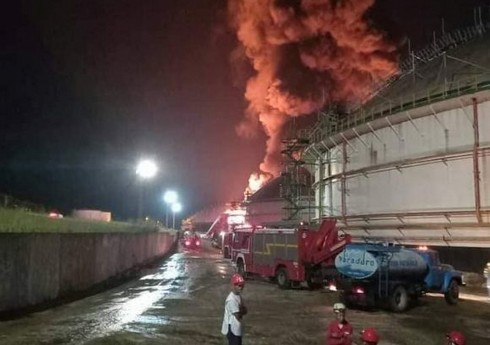 The number of injured in the explosions at the tanker base in the port of Matanzas, Cuba, reached 77 people.

“Report” informs that this was reported by the local press. It is noted that multiple explosions have been recorded in crude oil warehouses in the north of the country.

Officials said that the fire was caused by lightning in the fuel warehouses, 77 people were injured, and 18 firefighters were missing.

An explosion was recorded in 4 out of 8 tankers in the port, the fire is still going on.

Health Minister Jose Angel Portal said in a press release that some of the injured are in serious condition.

Due to the strong wind, it was not possible to control the fire yet, thick smoke extended to the capital city of Havana.

President Miguel Diaz-Canel Bermudez and Prime Minister Manuel Marrero went to the port of Matanzas, received information about the fire and visited the wounded who were being treated in the hospital.

A large-scale fire occurred as a result of lightning striking an oil storage base in the Matanzas province of Cuba.

“Report” local portal reports that at least 52 people were injured during the incident.

Four explosions were reported in a nearby reservoir. All the victims are currently hospitalized, 10 of them are in serious condition, four are in critical condition.

Firefighters were called to the scene, there is no information about the oil spill.

The Ministry of Energy and Mining of Cuba said that the incident did not affect the work of Antonio Guiteras, Cuba’s largest power plant located nearby.

The number of dead in the explosion in the shopping center in Yerevan has increased, dozens are missing

Another body was pulled out from under the ruins of the "Surmalu" shopping center in Yerevan, the capital of Armenia. "Report" reports with reference to ... Read More