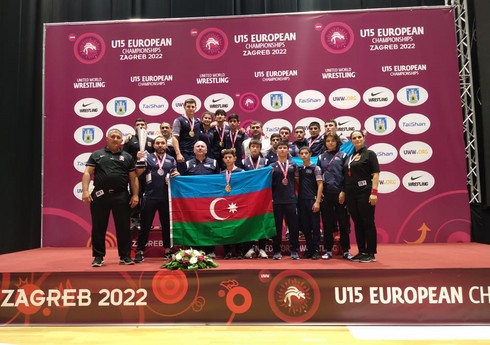 4 Azerbaijani wrestlers won gold medals at the U-15 European wrestling championship in Zagreb, the capital of Croatia.

“Report” informs that freestyle wrestlers fought after female wrestlers in the continental championship.

Thus, the national team won 4 gold, 1 silver and 3 bronze medals in freestyle wrestling. Azerbaijan took the 2nd place in the team score with 136 points. Georgia (153) ranked first, and Ukraine (133) ranked third. According to the number of medals, the team was better than all other teams.

It should be noted that this result is a record indicator for Azerbaijani freestyle wrestling in the U-15 European championships according to the number and size of the medals, as well as the accumulated points.

Azerbaijani wrestler: “I want to repeat my father’s result”

"I wanted to reach the finals. I passed very strong opponents. Frankly, I didn't believe it myself. But I worked, suffered and reached the semi-finals." ... Read More

The flag of Azerbaijan, which was removed during the attack of a group of radical religious groups on the Embassy of the Republic of Azerbaijan ... Read More

NEWER POSTA 46-year-old man was stabbed in Khudat
OLDER POSTBorrel: “The meeting of the heads of foreign affairs of Azerbaijan and Armenia is an important step towards a comprehensive solution”