22 people died as a result of landslides in India 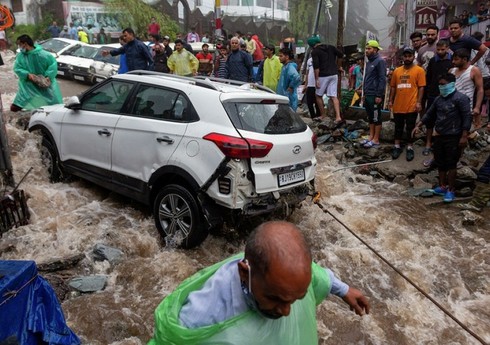 At least 22 people, including a family of eight, have been killed and five others are missing as a result of landslides and floods caused by torrential rains in northern India’s Himachal Pradesh state.

“Report” informs that this was said by Sudesh Kumar Mokhta, director of the Department of Natural Disaster Management of Sudesh State.

According to him, the most damage was recorded in Mandi, Kangra and Chamba districts.

Landslides have paralyzed traffic on many roads in the state, including the major highway from Manali to Chandigarh.

He noted that 36 incidents related to adverse weather conditions have been registered in the state and the highest number of deaths occurred in Mandi district.

In the last month, 100 people died in road accidents in Azerbaijan

In the last month, 89 traffic accidents occurred in Azerbaijan. “Report”According to the information obtained by , 100 people died as a result of traffic ... Read More

A passenger car collided with a tractor in Yevlakh, one person died and one was injured

There was a serious traffic accident in Yevlakh. "Report"According to the information, the incident was recorded in the village of Khanabad. T. Allahverdiyev, born in ... Read More

The number of people who died as a result of monsoon rains in Pakistan has reached 1,545

NEWER POSTAn incident occurred in the match between “Sabah” and “Neftchi”.
OLDER POSTMedia: Arestovich is no longer an adviser to the head of the Office of the President of Ukraine