2 people were injured during the flood in Shamkir 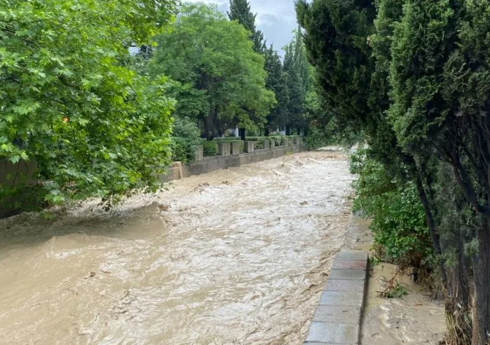 A flood occurred in Shamkir as a result of heavy rains.

“Report”According to the information of the Western Bureau, torrential rain has fallen in the Western region since yesterday evening.

After the torrential rain that fell in Irmaşli village of Shamkir, a flood occurred in the area, and two people accidentally fell into the flood waters during the natural incident. They were pulled out of the water with the help of nearby residents.

The injured Sh. Mammadova, born in 2005, and another person were taken to the hospital by the vehicles of the emergency medical brigade that were involved in the incident.

It should be noted that the rainy weather continues in the region, there is hail and lightning in Ganja and surrounding regions.

A mine exploded on the Turkey-Armenia border, one person was injured

A mine exploded on the Turkey-Armenia border. “Report” "Kars Guncel" reports that 1 person was injured as a result of the incident. The explosion took ... Read More

A 27-year-old girl was injured in a traffic accident in Absheron district. According to "Report", the incident was recorded in Gobu settlement. Thus, Sultanova Reyhan ... Read More

NEWER POSTThe UN Security Council will discuss the situation in Gaza
OLDER POSTAfter the cease-fire began, rockets were fired from Gaza into Israel